The Boogie Bumpers band members come from different musical backgrounds, but they all share one common thing, their love of music! Check out below their individual bios.

Want to know more about the Boogie Bumpers? Contact us to discuss how we can make your event even more special. 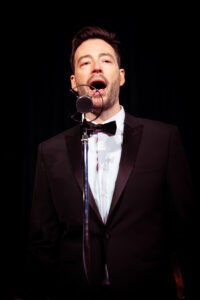 Singer Kristian has had a rather unusual route into singing. After taking a series of vocal classes as an expat in Shanghai with former Harvard jazz professor and pianist Steve Sweeting, Kristian realised that his voice would be an ideal fit for singing jazz, swing, and blues. He then spent three years honing his craft in jazz workshops, jam sessions and performances at the renowned JZ Club in Shanghai

After returning to the UK in 2011 to embark on a full time career in music, Kristian met up with Boogie Bumpers sax player, and school friend James Rawlinson. Realising that they shared a passion for swing and Jump Blues, the boys soon began playing together as ‘Tall Order Jazz Band, establishing themselves as one of Dorset’s best jazz duo’s.

Kristian has since performed at venues such as The Bournemouth Pavilion Ballroom, Compton Acres, Highclere Castle, and even for Julian Fellowes, director of Downton Abbey. He also performed several times with well-known ten-piece band the Regular Joes.

As lead singer of The Boogie Bumpers, Kristian gets to sing the music he loves best. From the drama and uncomplicated fun of a Louis Jordan or Louis Prima tune, to more modern takes on jazz and blues classics, Kristian has found his musical home. 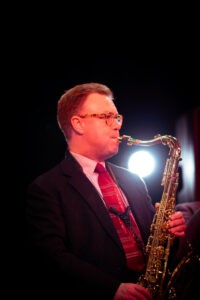 James is a Hampshire based saxophonist and clarinettist. He is involved with such bands as The Red Fez Orchestra, Bevin Boys, The Regular Joes and many others. Trained as a classical musician he quickly found a love for Jazz, Swing and more contemporary music. James has performed all over the world and in venues and festivals such as Buckingham Palace, Goodwood Festival, Twinwood Festival, Montreux Jazz Festival. Also heavily involved in music education, James uses any opportunity to combine both passions. Musical director of The Boogie Bumpers, with his wealth of knowledge for this era, James keeps things swingin’! 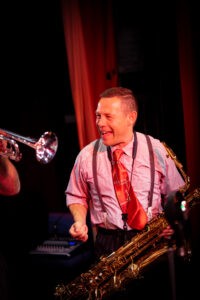 Andrew started his musical career later than most, but after studying a Bmus in Music Performance at the University of Chichester, followed by a Masters in Music Performance at Southampton University, Andrew is kept busy both performing and teaching. Andrew is also the band leader of The Boogie Bumpers, and along with musical director James Rawlinson, makes sure this band is in top form at all times. It is Andrew’s love of swing, jazz and blues, with the desire to play for audiences that love to get up and dance, that made The Boogie Bumpers what it is today!

Andrew’s firm belief is music should be fun, and what better way to enjoy it than with this amazing band! 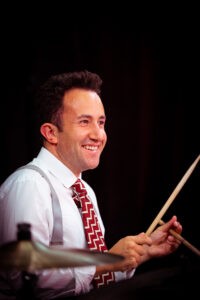 David started his professional career at the age of 19 as drummer and percussionist with “The Best of Musicals”, two three-month tours of city theatres through Germany, Austria, Denmark, and Italy. Shortly after, he worked around the world on Celebrity Cruises and Saga Cruises as the show-band drummer working with cabarets, production shows, ballroom dances, big band sets, and jazz sets.

Since settling back to life on land in 2013 as a freelance drummer and percussionist, his performing credits include Gareth Gates, comedy legends Cannon & Ball, The X Factor’s Chico, UK jazz singer-songwriter Kevin Fitzsimmons, The Joe Loss Orchestra, Five Star Swing, The String of Pearls, Tony Waller’s Prohibition Jazz, and The Red Fez Orchestra.

He is also very active in musical theatre work both locally in regional productions and touring UK theatres with the shows “Sinatra, Sequins, and Swing” and “Bublé Meets Sinatra: The Showdown”.

David is passionate and well-experienced within the swing genres that “The Boogie Bumpers” play, enabling to carry the band and making it sound authentic to the era. 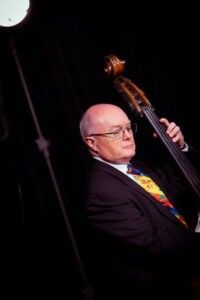 Dave plays upright bass; before joining the fabulous Boogie Bumpers the only previous bands of note to benefit from his driving groove were the Brockenhurst based dance band “The Forestaires” and the famous Birmingham based “Table 34”. He also is a keen classical bass player and can be seen regularly playing with local symphony orchestras. Dr Vincent brings the brains to the bunch. 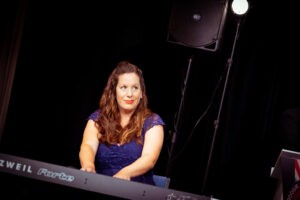 Nat is a versatile professional musician and educator. Since the weeny age of 14 years old as well as being a member of the local jazz and classical youth orchestras she was out earning a crust in numerous jazz funk bands and jazz quartets in and around the Dorset and Hampshire area.

She has toured the UK and Europe and supported many jazz and blues greats including the likes of Georgie Fame, Jim Mullen, Chris Farlowe and the legend Roy Ayers, and she has also played with Groove Armada.

She is the boogie-woogie heart of The Boogie Bumpers!

Chris is a Bournemouth based trumpet player and occasional singer. Outside of the Boogie Bumpers, Chris can usually be found sharing the lead trumpet in Swing Unlimited Big Band or in the pit band of a local musical theatre production.

Until roughly the age of 13/14 Chris was a strictly classical trumpeter. At that time the school big band was formed, and from that moment on he discovered his love of all things swing! Chris also enjoys the trad, dixie sound as well as latin jazz – but not modern. Chris hates modern..

Chris has played a vast range of venues across the south of England with many different outfits including a Michael Buble tribute, Frank Sinatra tribute, Count Basie orchestra, a number of big bands, function bands and a funky soul band. He has supported such acts as the James Taylor Quartet and the Sugarhill Gang. It’s a pleasure to now be swinging alongside some top musicians in the Boogie Bumpers!

Jonathan is a Bournemouth based trumpeter. He likes nothing more than playing jazz, boogie and all things swing! You’ll find Jonathan playing with various local bands including The Red Fez Orchestra, Swing Unlimited Big Band, or his own band, the Quiet Trumpeter Quintet. But don’t be fooled, he’s got a lot to say when the Boogie Bumpers play!